Theo is now 15 months and he still has his shelves next to his bed. It has been working great for him and has not disturbed his sleep. He has really enjoyed having his own work that his big brothers cannot play with. We spend about 1 hour every morning working there and we read a few books there when he wakes up from his nap. The rest of the time is spent doing a lot of gross motor activities, he loves being chased, playing ball, climbing and going outside (although it's a bit cold right now we still do our best to be outside once or twice a day). 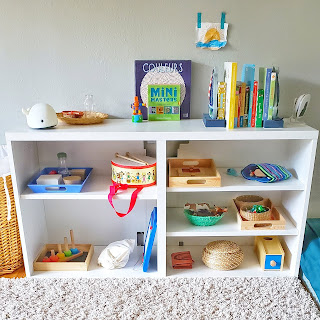 I have been rotating the items on the shelves fairly often when I notice he loses interest in one of the items. At 15 months old, here is what is on his shelves and why: 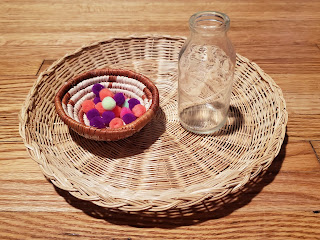 Pompoms posting
This is his current favorite. It is a great fine motor work. I made it for him when I observed his interest in putting little things in holes. Because of the small pompoms that always end up in his mouth this work is on top of his shelf where he cannot grab it independently; therefore this work is supervised at all time (he asks for it when he wants it though!) 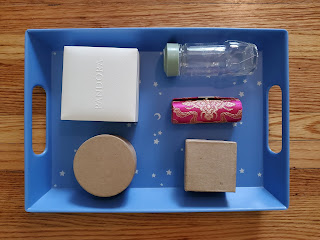 Open/Close work
This is his next favorite. Any box he finds he will try to open or close it. These are mostly easy one for him. The 2 cardboard boxes open and close easily. The white box has a hinge however it is still a bit hard to open so I will help him. The pink one just lifts open and he loves it. The herb container wasn't here originally however he opened the full container after finding it in the pantry while I was cooking and poured the herbs everywhere, so I figured he was ready for an easy screw top, I cleaned the container and added it to his shelves! 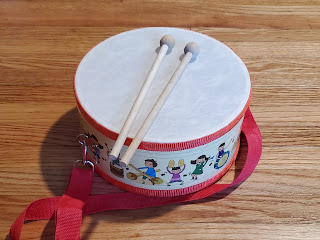 Drum
He still loves banging on this drum (similar drum here)! That being said, he has now figured how to put it around his neck and walk around with it while banging on it! It's the cutest thing ever! But it is now a supervised toy because of the strap around his neck. 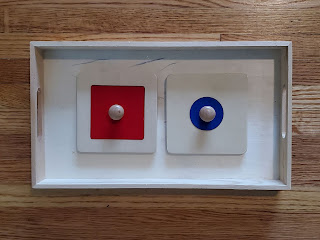 Simple Puzzles
These 2 simple puzzles came in a set of 4 shapes. This is a great hand eye coordination work. He mastered the large circle one he worked on previously and is now working on the small circle and the square. The circle is pretty easy for him but the square requires more work. Once he has mastered the square I will be replacing it by the triangle. 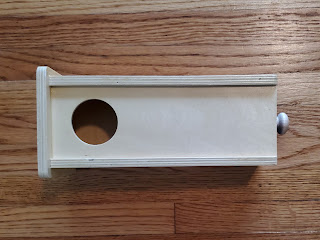 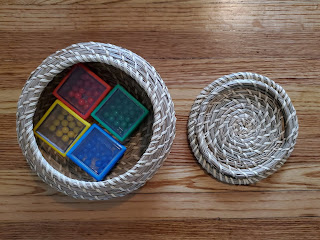 Sensory blocks
We got these sensory blocks a long time ago. They come with 4 colors and each colors has 3 different bead sizes. Right now he likes shaking them, and I have observed him listening carefully to the different sounds they make. Also he likes to knock them down if big brothers or I build a tower. 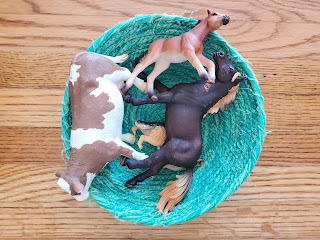 Basket of Animals
I always like to have a basket of animals for my little ones. The current animals are: horse and foal, dog and cow, these are all animals he has seen. We use this more for language and I describe each animals, call them by their name and make animal sounds. He has shown a strong interest in horses (probably due to the fact that I make it run and neigh!) and that is why there are now 2 horses in the basket. 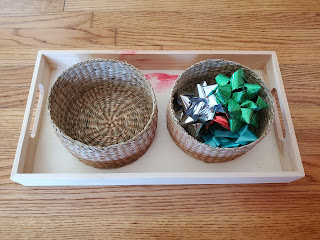 Transfer work
The last transfer work I made for him was used as a dumping work! Since he really loved the Christmas ribbons, I changed the transfer work a bit and used the ribbons in it. He will now do a few with guidance and then... he happily dumps them all out of the basket! But there is now clear improvement. 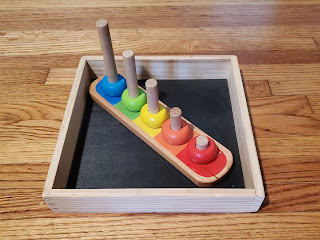 Ring stacker with one ring on each stake
This is the counting and color ring stacker however at this point we are only using it for hand eye coordination and fine motor skills. I only have one ring out for each stake so it is
easier for him and he enjoys taking them all off and putting them back on. As he grows I will start using it as a color matching work. 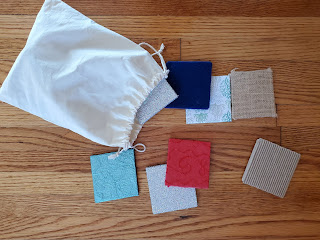 Texture Tablets
These are homemade (see my Instagram post for how I built them) and he loves them. He will take them all out of the bag one by one and explore the textures and different colors. 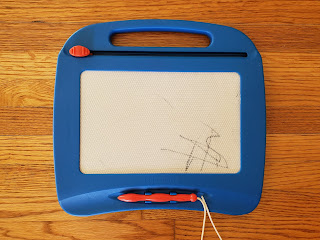 Magnetic tablet
He loved pens, pencils, markers, paintbrushes... and mark making! However he tends to run around the house with them and draw on walls and floors (we are working on redirecting). So for now in his room he has this little tablet for mark making. I don't think he enjoys it as much as a real pen but until he understands where he can draw or not, it will have to do! 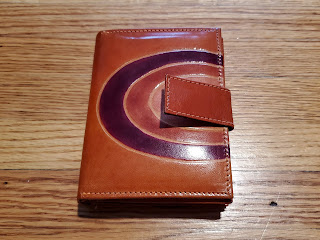 Wallet
He loves holding my wallet at the grocery store and helping me get my credit card in and out but gets really sad when it is time to put it away. So I found an unused wallet and added old cards to it and large coin from the coin box that we are not using yet. He enjoys exploring it and getting everything in and out of the wallet. 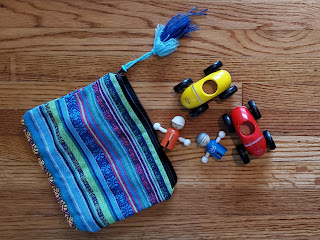 Cars
I placed 2 little cars with 2 men in a little pouch (I do not zip it as he cannot open it yet) and he uses them for a mix of hand eye coordination (putting the men in the car) and rolling the cars around. At this point he doesn't seem very interested in the anymore though, so I will likely swap them out soon. 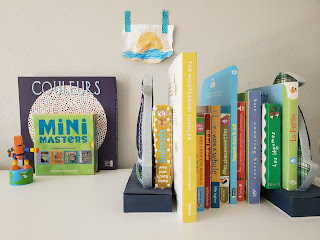 Books
He has a few books on top of his shelves. They are placed close enough to the edge that he can grab the on his own and, although he has a bookshelf in his room, these are the books he likes to read when he wakes up from nap. If you notice there is also a mom book in there that I like to read while he works. The little drawing on top was made by Alex for Theo and it is high up so Theo does not crumble it again!

Playsilk (or any blanket!)
We have the Enchanted Playsilk and it is stunning! It hangs on the side of his shelf from a 3M hook. His favorite game with it right now is to play peek-a-boo. He puts it on his head and removes it on his own and laugh so hard!

In addition to the work on his shelf he has some toys in the living room, mixed in with the big guys toys:
- the Galt pop-up toy (always a huge favorite!)
- a basket of balls for throwing back and forth
- music instruments (enough for all 3 of them to form a band!)
And he loves playing with his brothers' cars and the kitchen cabinets he has access too.

These are the works we have that are out for him however we also spend a lot of time outside in the backyard or the park. He is very much into gross motor work, walking forward and backward (?!!), running and, especially, climbing!


If you want to see how he is currently using the works, check out my latest IGTV video.

For more, see Theo's shelves at 1-year-old and see
Theo taking care of his first practical life tasks at home. 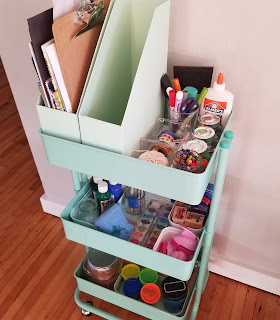